I had the amazing opportunity to visit Shanghai for work, with a little side trip to Hong Kong.

Hong Kong is a fabulous, modern and trendy city with something for everyone. I enjoyed the Soho area on Hong Kong Island with all of the trendy shops and restaurants. There is an international vibe in this area and a creative energy that reminded me of New York. I would definitely go back to Hong Kong & spend more time – maybe get some custom clothes made.

Below are some of my tips & observations in Hong Kong:

Egg waffles are a popular street food to try with long lines. They tasted a lot like a hot fortune cookie but in a waffle format. Not very sweet, but they seem to be all the rage. I personally could have used a little bit of vanilla ice cream and nutella – that would have taken them over the top.

Public transportation is a breeze! So easy and clean. There is an express train that goes from the airport to Kowloon, and a shuttle that goes straight to the Regal Kowloon Hotel.

Shanghai has the best skyline I’ve ever seen. The city is slightly overwhelming as it’s very large and spread out with a population of 23 million people. Being from Chicago, our skyline is hard to beat, but I fell in love with the gorgeous buildings and the Shanghai pearl tower.

Overall, this was a trip to remember – my first major international business trip. I flew business class for the first time & that’s definitely the way to go for a 15 hour flight. The fully reclining seats & lounge access are a huge bonus. Traveling truly makes you appreciate different cultures, but also reminds you of the things you take for granted (like our freedom of speech and our wonderful variety of food). So long, China! It’s been real! 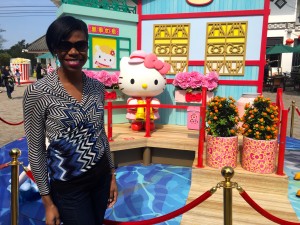